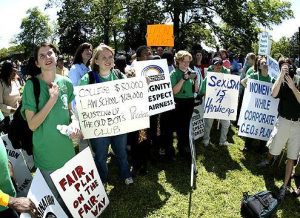 I am a woman, so I know that at times we are absolutely nuts. I do, however, love and appreciate women who are so absolutely nuts that they develop a platform about it. I call this modern day ‘feminism.’ Now, don’t get me wrong (here is my only out for this soliloquy), I believe that women and men should be equal to obtain the same ‘unalienable’ rights as each other. But certain things are for certain genders and need not be tampered with. For instance, the boy scouts. Since when did a million and one mothers attend ‘male bonding time’ while camping in the woods and sporting yellow ‘scout mom’ tees. It’s a little invasive. It’s like why my 25 year-old fiance isn’t prancing around the neighborhood asking to babysit people’s kid’s…there are policies, here.

As I spoke about in my last posting, I have been known to break down into tears mid-run for various reasons…usually media-related. I was running the TCU track at 7:30 one morning, just in time for the Kid Kratic and the morning show group of 106.1 Kiss FM to get started on their drive-to-work conversations. The spotlight on this particular morning was on a feminist, Martha Burke, who was protesting with her heart and soul outside the gates of one of the most famous all-male golf courses in America–Augusta. There was a huge Masters tournament underway during the week of the broadcast, and her publicity about the magnitude of her protesting group got a fair amount of media attention. One of the radio heads decided to be there during the hoopla and get some sound bites to share with the listeners. He was also rather coy and decided to stir up his own commotion, bringing propaganda to protest against her protest.
So here I am, power-mile two and I hear the clips from this protest:
M.B: “We have fought long and hard, and the battle is not over yet. (Something else about the integrity of the female race, key figures in history, and why we still aren’t over the gender-equality issue today). So hear us: OPEN THESE GATES! Enough is enough! LET US IN!…………….
Background Radio Head (holding large orange signage–where’s waldo above): “Iron my clothes!…………Make me dinner!……….
I was both appalled and amused. I loved it so much that I was crying with laughter…and so was everyone on the station. I decided I want to be this guy someday. Not the kind that intentionally tries to ruin feminist ideals, but someone who randomly shows up to things and causes a serious riff. I’ve always wanted to join a show the supports this…from Candid Camera, to Punk’d, to Boiling Points…these people have the best jobs in the world. It’s the reaction-value. It’s the reason I’m writing this blog today. I love the reactions more than I love the stories themselves. So keep it up, morning team, you’re nothing but inspirational!